Steam powered rocket pack designed by Bernard Maets, a little known but very prolific inventor of the 19th century.  How many of these little rocket pack were made is as  yet unknown, but everyone is unique.

To fly like the birds has always been a dream of mankind. No less for Bernard V. Maets who’s vision of flight led him to experiment with rocket packs such as this unit.  Reportedly capable of short hops due to the limited fuel and steam capacity, this unit made several manned flights in 1913 and 1914.

The center tank contains the steam generation engine which is controlled by the user with the squeeze grip.  High pressure steam is ejected out of the two main thruster as well as the single stabilizing nozzle mount on the main steam tank itself. The lift is significant, but not sufficient, at this point, to lift a person. The video shows a test fire of the rocket pack.

Unusual for this unit is the paint job of the rocket pack. Generally, Maets did not paint his inventions.  It is believed this unit had actually been intended as a gift to a girl friend.  It had been passed down several generations by a family that wishes to remain anonymous.  It was donated to the Maets Foundation for further research, which is on going. 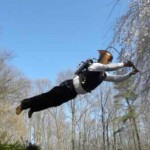