Home » The Unknown Wonder of Invention » Hoverboard Back Story 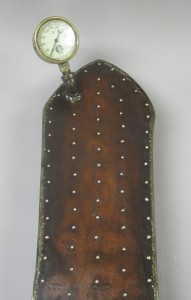 Bernard Maets’ steamshop ran on a quota; eight hours a day was the standard for workers, and so long as that amount was filled it didn’t matter when you started or finished. This meant that some, who preferred the evenings off, would arrive early and continue whatever work was left over from the night before. However, as the usual early risers were signing the roster, a great hissing noise could be heard from the forest. The assembled workers turned towards it and squinted in to the woods, trying to locate its source. Just as one of them was about to speak, a figure shot from the trees trailing a great plume of steam from its feet. As it neared them at terrific speed they realised it was Maets, standing astride some flying contraption. He veered left and circled the shop once, in a big wide arc that ended at the entrance. There, he leant back and the steam brought him to a halt, allowing him to deactivate it and step on to the ground. He removed his goggles and addressed them at large.
“Good morning gentlemen,” he said grandly, an uncharacteristically gleeful grin on his face, “how are you all?”
A chorus of good natured responses mix with laughter and wonderment rang back at him.
“Fine sir,” chuckled one of the foreman, “better for seeing you on that thing”
“Splendid! No doubt you’ve all noticed my newest invention,” he stepped on a button and the board leapt up to waist level, where he caught it under his arm, “I grew weary of my daily commute through the woods, you see, and having now tested it I find this conveyance far more exhilarating.”
“Just a smidgeon more, I should think!”
The throng of workers admired the board and congratulated their overseer on his newest stroke of genius. It was around as long as a man’s arm and crafted of what appeared to be a rich wood with rivets embedded in its surface, but was in fact a patinaed steel. Maets said the rivets were for traction, with the added side effect of looking rather fetching. Two brass funnels beneath the board vented steam from a pressurized tank on the rear of the little platform, which provided both lift and steering.
“It’s a fine piece of work, Maets,” said the foreman honestly, handing it back at last.
“Thank you,” he replied, still bouncing slightly, “now, shall we start for the day?”
“Can I have a go?” asked one of the apprentice boys hopefully. Maets laughed heartily before responding.
“At lunch, my boy, so you’ll have something to look forward to!”

Reports collaborated from several workers’ journals indicate that the lunch break that day was a period of much frivolity, and was extended so that all in attendance could have several turns doing laps of the field. All parties made comment on how jovial Maets remained for several days afterwards. The board’s history is still muddy, but when it was found by the Maets Foundation it was in the possession of a janitor, working at the Wright Brothers National Memorial in North Carolina. He was loathe to part with it, but agreed that while it got stains out of carpet just fine, it was probably meant for better things.