Home » The Unknown Wonder of Invention » Missles Back Story 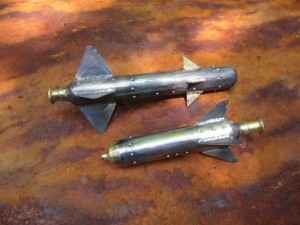 “Maets!”
The cry sounded dull, being away and outside the steamshop. A few heads turned,  minor alarm stirring within the workers.
“Maets!” it was closer this time, almost at the door. Maets himself stepped out of his office, frowning at the sound. One of the apprentice boys, sent to town to fetch more paper, burst through the door waving a newssheet.
“What is it, boy?”
“The Germans sir! They’ve got rocket packs!”
A murmur of concern rippled through the floor. Maets blanched.
“What?”
“Look, sir!”
Maets took the paper off him and beheld the headline: THE NEWEST GERMAN THREAT: FLYING INFANTRY. It was underlined by a blurred picture of a German trooper with something on his back. The silhouette was unmistakeable; a tank, and a downward nozzle.
“No…” whispered Maets. One of the foremen read over his shoulder.
“These photographs, taken by Allied spies, depict German infantry training in the use of personal flight devices. If successful, this venture would allow the Germans an unparalleled command of the air, and the ground. Intelligence suggests that the devices began as a possible replacement for parachutes, but has now evolved in to something more dangerous entirely.”
He was going to read on when Maets suddenly handed him the paper and stalked off to his office. One of the workers cast a concerned eye through Maets’ window, and saw him at his desk, his head in his hands.
“He can’t blame himself,” said one of the senior workers, “he didn’t tell them how to build it.”
“No, but they probably got the idea from him,” muttered the foreman, “back to work lads, he’ll talk in his own time.”
Maets did not talk until around an hour later, when he emerged from the office with steel in his eyes.
“Foreman,” he said, “have some of the black powder fetched from the storehouse and brought to my office.”
The Foreman disappointed everybody by saying “Yes sir,” without asking why. It was a rare man who could judge the moods of Maets, and a respected man at that. Maets showed his face only once after then, to accept the barrel of powder. For the rest of the day, and most sources indicate for the rest of the night, he was in his office, hammering away in his private workshop. At opening the next morning, he walked out, not an ounce of tiredness in his stride, with three long cylinders under his arms.
“What have you got there sir?” asked an apprentice.
“The German solution,” said Maets, and set them down. He walked back to the shop, and then returned with a crude, metal mannequin, fitted with the skeleton of a rocket pack. This he placed on the ground facing the forest, before pulling a lever on its back and stepping away. The contraption’s rocket fired, and it soared into the air. With agility that belied his age (whatever that was), Maets brandished one of the cylinders and jammed some concealed trigger. The entire thing sped from his shoulder trailing steam, and brought a swift, fiery demise to the hapless dummy. Maets watched it fall from the sky and land with a clank in the forest somewhere.
“You two,” he pointed at a pair of random apprentices, “fetch it out for scrap metal. Somebody else prepare a telegram to Washington.”
“What should I title it sir?”
Maets smiled for the first time in a day.
“The German solution.”
Happily, Maets’ solution to the German Lufttroopers was never required. The German’s experiments in personal flight was either discontinued or destroyed during the final weeks of the war, along with most evidence of their ever happening. This device is notable among Maets inventions for its immense destructive capability. Maets had certainly built weapons before, but whatever feelings he had about the German rocket packs, they were apparently sufficient to drive him to new heights. The duty foreman’s diary reports that Maets was less inclined to produce creative work for several weeks after the missiles, suggesting that he felt a little remorse for creating them.