Home » The Unknown Wonder of Invention » Rocket Pack Back Story 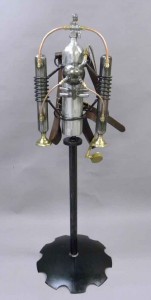 Maets’ Steamshop was in a flurry of activity. Michael had signed on only recently as general help; he was sixteen, he had no real technical skill, but he was able-bodied and a fast learner. The various inventions that Maets designed and had constructed often required more than the usual number of hands  to build, so until he could develop a working prosthesis Maets hired boys like Michael. The pay was good, almost two dollars a week, and there were opportunities for apprenticeships. Today, Michael liked to think he was taking a step towards such an apprenticeship. Maets had yanked on the steam whistle and called for quiet while he spoke. He required one able-bodied man to test the capabilities of his new invention. None of the other hired boys raised a hand, so when Michael did he was swept away under the grateful arm of Maets himself, who gesticulated wildly and professed many of his own views on upstanding young boys with the courage to advance science. He was led away and strapped in to a chest harness, a process carried out by two serious men with moustaches that almost rivalled Maets’. When he was firmly trussed up, they stood back and looked over him critically.
“How much do you weigh boy?” asked one.
“No more than twelve stone sir,” said Michael nervously.
Maets and his fellows exchanged serious glances, nods and murmurs for a moment. Apparently some assent was met, and Michael was led out the back of the shop to the pond where he and the other boys sometimes ate their lunch. A short gangway had been assembled over it, and at its end on a stand was a glistening contraption that caught Michael’s attention.
“My boy,” said Maets, clapping Michael on the shoulder, “this device will one day revolutionize the way we live our lives. I can only assume you’ve heard about what Tesla’s doing with his electricity?”
Michael nodded dumbly, having heard vague shouted snippets about ‘godless lightning merchants’ in the shop.
“He believes that his lightning is going to be the basis of society for hundreds of years,” Maets’ moustache tweaked up as he grinned smugly, “well I say different. Flight, my boy! Flight is the way of the future!”
Michael stood still as they attached the device to the harness he wore. It had a central cylinder that fed two auxiliaries, each covered in spiralling coils of steam piping.
“If you don’t mind my asking sir, what is this?”
“As I said boy, flight!” Michael and the other boys had learned to recognize the moods of Maets; this one indicated something extraordinary was about to happen. “You are about to be the first true aeronaut.”
“I’m going to fly sir?”
“Precisely!” Maets’ assistants finished their work and drew back. Maets produced a gauge on a length of pipe from the assembly on Michael’s back and handed it to him. “When the needle reaches twenty thousand— you can read, can’t you boy?”
“Yes sir.”
“Good,” Maets’ pointed at items of the gauge while he explained them, “when the needle reaches twenty-thousand kilopascals, around here, brace yourself, squeeze this lever, and be ready to fly. Understand?”
“Yes sir.”
Maets smiled warmly and took Michael’s shoulder once more.
“You’re about to make history.”
Michael nodded and ducked to allow Maets to perform some last minute tinkering. He pulled on something and Michael felt the cisterns on his back begin to vibrate and shudder. Maets nodded to him and walked quickly to where his companions were standing. Michael noticed one of them had binoculars. The whine on his back slowly reached a spine-shaking crescendo, prompting him to check the gauge. It was at around eighteen-thousand, so he planted his feet squarely and cast a final glance at Maets. The man nodded to him. Michael would have preferred some shouted advice or encouragement, but the needle was creeping over twenty-thousand, so he looked skyward and squeezed.

He awoke a few seconds later to a world of noise and wind. Yelling soundlessly he flailed in the air, trying to remember who he was and how he got here. The gauge in his hand delivered a swift kick to his cognition, and he looked around. He was high above a forest, and still climbing. He twisted left and right, trying to locate a landmark. He eventually contorted enough to see the shop, dwindling behind him. He felt his stomach begin to rise and guessed that he was reaching the top of his arc. All at once, the rig behind him fizzled into silence, and the harsh terror that only gravity can command gripped his chest like a vice. He fell, arms whirling and legs cycling, hurtling towards a thicket of trees. He reflexively covered his face, bringing the control console in front of it. Without knowing why, he jammed down on it again as the ground approached, and felt the rocket pack ignite again. A great gout of steam slowed and caught him, then again he was falling, if only from a few metres up. The wind left his lungs as he hit the forest floor. He tried to get up, but was too shaky to do anything. He collapsed and allowed consciousness to flow away from him, dimly aware of approaching footsteps and voices.
“Over here!”
“Is he alright?”
“He’s breathing!”
“Thank the stars, get it off him and get him up…”
Michael felt hands pull him away from the comfort of the soil before he fell properly asleep.