Home » The Unknown Wonder of Invention » Time Loop Back Story 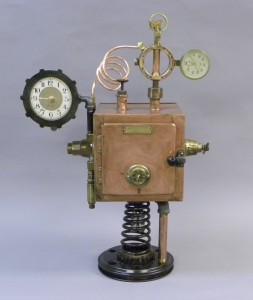 Chronology, the study of time, has long been a passion of those involved in the deep sciences. The revelation involved when discovering that our three-dimensional world is actually a four-dimensional universe often brings about fits of blithering, unsettling grins, or both. It is possible that once the brain discovers a new dimension, it immediately begins to devise ways to navigate it. In most cases, it is met with acceptance; we are already travelling in time. Steadily forward at a rate of one second per second. That wasn’t good enough for Bernard Maets.
He produced several machines to facilitate travel along ‘the Fourth Axis,’ as well as a few auxiliary devices that made such journeys easier. The journal of one of his many hired hands describes a day on which Maets discovered a note from his future self about an event in the past which had never occurred;

I have seen him rant and rave about the workings of electricians, and about the ignorance of chemists and physicists, but none of those topics could possibly throw him into the rage he reached today. He found upon his desk a scrap of paper reading ‘fire of Jan 3rd – Averted’ in his own handwriting. He frowned quizzically and asked my foreman if we had experienced any conflagrations of late. The foreman replied that we had not, but only thanks to a well-placed bucket of water that happened to fall upon a runaway bandsaw yesterday (1). Maets demanded to see the bucket, which the foreman produced. Maets frowned at it, then returned to his office. Moments later he returned with an exact duplicate of the pail, the dings, stains, waterline, all identical.
“Two instances of the one object…” he said, “Jefferson, draft a telegraph to Planck and leave it blank, I’ll write to him tonight”.
The indicated artificer nodded and strode off to the administration office. I was of the opinion Maets had more on his mind, but he was silent from there on. He placed the buckets on a workbench next to each other and gave us all the day off. The foreman and some of the artificers stayed behind, as did I, because the clockmaker’s cart goes past my house. Maets performed several tests on the buckets (or bucket, I don’t know which is appropriate), but nothing came of them. For all intents and purposes they were ordinary pails of beaten tin. Frustrated, but as of yet composed, Maets sighed and pinched the bridge of his nose. He ordered the buckets moved to his office, where he would study them in the morning. My foreman waved at me and I moved to carry them, but as I did one of the artificers dropped his monocle and knocked the table while bending to retrieve it. There seemed, to me at least, a ripple through the air, centred on one of the buckets which now spun on its rim like a flipped coin coming to rest. I tried to catch it before it fell, but it was like trying to move through jelly. I saw Maets turn around, his eyes wide with astonishment, but with all the speed of a snail. The buckets arced a strange, blue lightning all around us; I felt the tingle of it pierce my own hand at one stage. Even with time slowed down I could see Maets’ mind racing. The tendrils of each bucket eventually found the other, and they began to drag across the table towards each other. There was a sound which I cannot describe, but something like church bells mixed with the buzz of a beehive would be on the right track. The buckets began to move through each other, a sight which made the brain bend and honestly made me slightly nauseous. After a minute or two of grinding through one another, the buckets flashed and there was only one, fizzling slightly. Everything sped up again, and Maets finally reached the table to grasp the thing.
“Complete reconvergence… the energy of it all…” he stared in wonderment, “you are free to go gentlemen, I doubt we’ll get much more out of it now.”
I left then, and the clockmaker and I had a hearty conversation about the whole thing.

(1) Notes from the previous entry:
‘I saw the most amazing piece of luck today; the autosaw was entirely beyond control and beginning to spark…’

Maets’ own notes confirm that this was the event which prompted him to design and build the chrono-purifier. In his cavorting through time he had caused a logic loop, a paradox, and he sought to correct this before it caused any major temporal shifting.